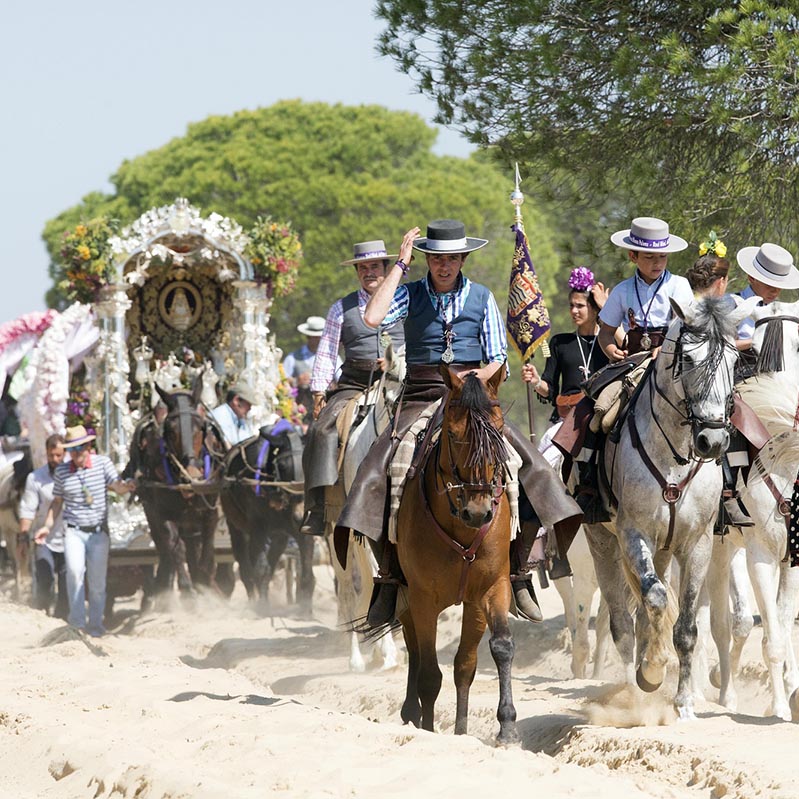 Casa Rural Lince is located in El Rocío, a unique place, equidistant from towns in three Andalusian provinces: Huelva, Sevilla and Cádiz. To this village, belonging to the municipality of Almonte in Huelva, more than a million people attend each year, which is undoubtedly one of the great events of the Andalusian cultural and devotional calendar: the Romería del Rocío. It was Saint Juan Pablo II himself, who pronounced the famous phrase "Let the whole world be rociero!".

The date of celebration of El Rocío is variable. Each year it coincides with the day of Pentecost, a Catholic liturgical festivity that culminates the Easter of Resurrection. Generally, this date usually coincides with the last days of May or the beginning of June. The first reference to a Marian place of worship in El Rocío dates from the first half of the 14th century and is found in the "Libro de la Montería" by Alfonso XI, in which the "hermitage of Sancta María de las Rocina" is alluded to. The Hermandad Matriz de Almonte was founded in 1648. In 1653, the Virgin from El Rocío was proclaimed patron saint of the town of Almonte and from that time the name of Virgen del Rocío began to spread, to the detriment of the previous one of Santa María de las Rocinas.

It is at this time that the first filial brotherhoods are founded, among which is the Seville of Villamanrique de la Condesa, which was soon followed by other brotherhoods such as Pilas, La Palma del Condado, Moguer, Sanlúcar de Barrameda or Triana. Throughout the twentieth century, this phenomenon has grown significantly and the number of sisterhoods has exceeded one hundred.

These fraternities travel every year on pilgrimage, on foot, on horseback or in carts, the road to the Village, where on Saturday (Eve of Pentecost) takes place. 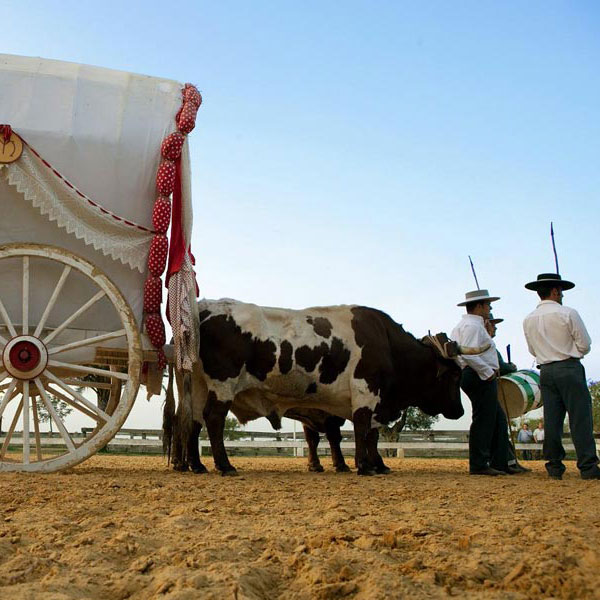 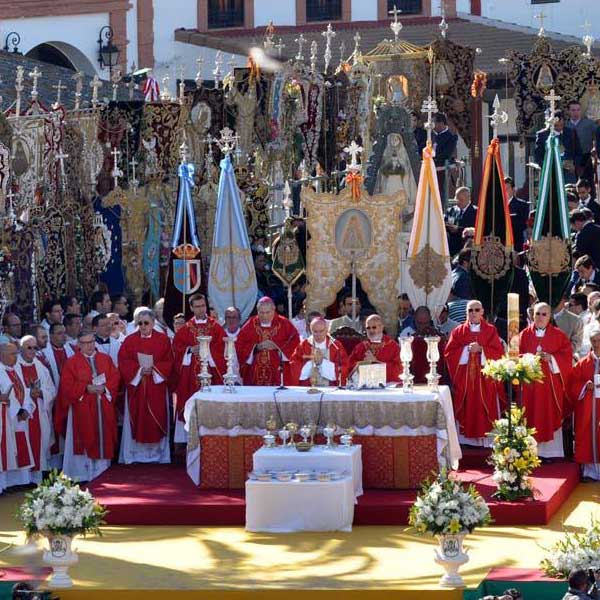 The important day of the Pilgrimage is Pentecost Sunday. In the catholic calendar, this day brings Easter and the coming of the Holy Spirit on the apostolic college is celebrated. In the morning, the traditional Pontifical is celebrated in one of the great esplanades that open next to the Sanctuary. He is attended by the main religious and civil authorities of southern Spain.

At its end, there are only the hours left until the departure of the Virgin. Sunday is a day of coexistence in the houses of brotherhood. No one visiting El Rocío in these days of pilgrimage will feel alien in this party, since the rociers welcome everyone with great hospitality.

The "Salto de la Reja" or exit of the Virgin

At midnight on Pentecost Monday, the recitation of the Holy Rosary begins with the simpecados, who parade before the sanctuary in reverse order of antiquity. The last simpecado in arriving at the hermitage, as it could not be of another way, is the one of the Brotherhood Matrix of Almonte, that enters the hermitage and must arrive at the presbytery, being at that moment when the "Salto de la Reja".

During the summer, Almonte celebrates his Thanksgiving Vow to the Virgen del Rocío.

If you choose El Rocío as your destination for rural tourism during the month of August, you can participate in the most beautiful services celebrated by the Brotherhood Matiz de Almonte in honor of the Virgen del Rocío. Such is its popularity, which is known as the Rocío Chico.

It is a matter of renewing annually the solemn vow that the people of Almonte made in 1813 in thanksgiving to their Patron, for having been liberated from the "furor of the Napoleonic troops". Today the town of Almonte, continues celebrating this ephemeris on August 18 and 19 of each year. 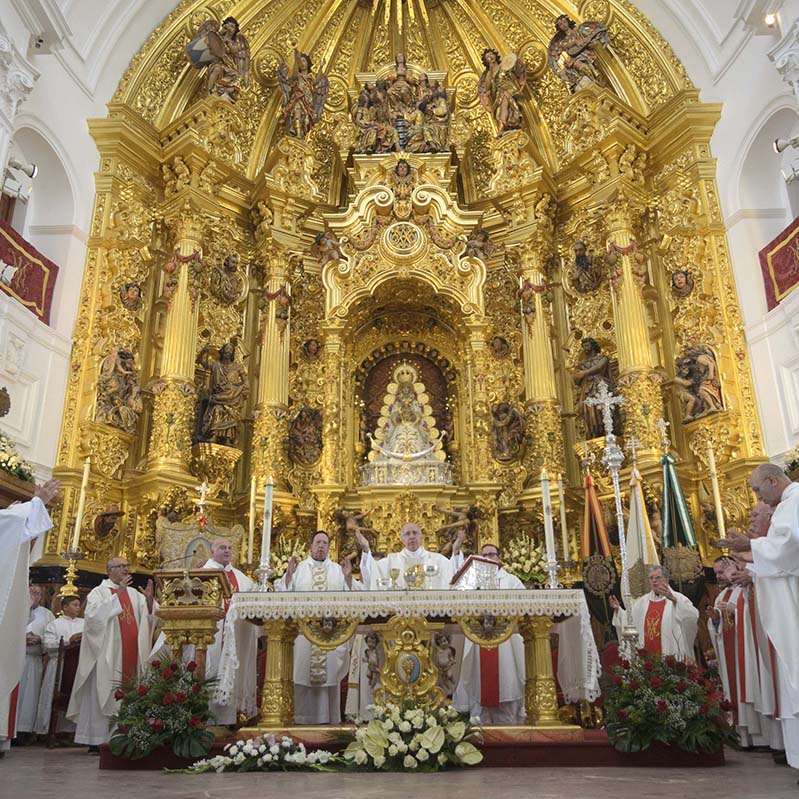 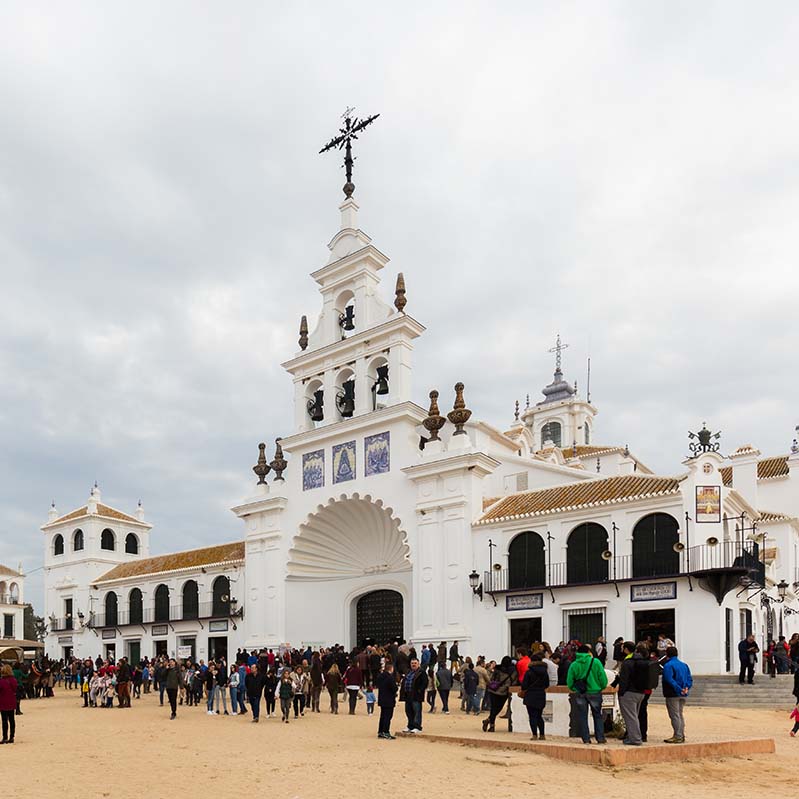 "La Candelaria" or Fiesta de las Luces" is celebrated on February 2, and in the Catholic calendar it takes place on the fortieth day of Christmas. This Catholic feast recalls the Presentation of Jesus to the doctors of the temple and the Purification of Mary, a Jewish custom to which the Mother of Christ submitted in spite of her Immaculate Conception. In addition, the symbolism of Candelaria also alludes to the fact that the Virgin Mary conceived Jesus Christ, light of the World.

Pilgrimage of the Brotherhood of Triana

The reason why it was known as "Candelaria de Triana" has its origin in 1959 when a group of brothers of the Brotherhood of Triana (Seville) decided to make a "winter road" for the Candelaria and go to Rocío on horseback from Villamanrique. With time this road became official as Extraordinary Pilgrimage of the Brotherhood. Later the Brotherhood Matriz decided to stop pilgrimage to Rocío on that weekend, reserving it exclusively for Almonte to celebrate the Feast of Light, ahead of Triana his pilgrimage to the previous weekend, leaving this Brotherhood with two pilgrimages: the "Candelaria" and that of All Saints' Day. 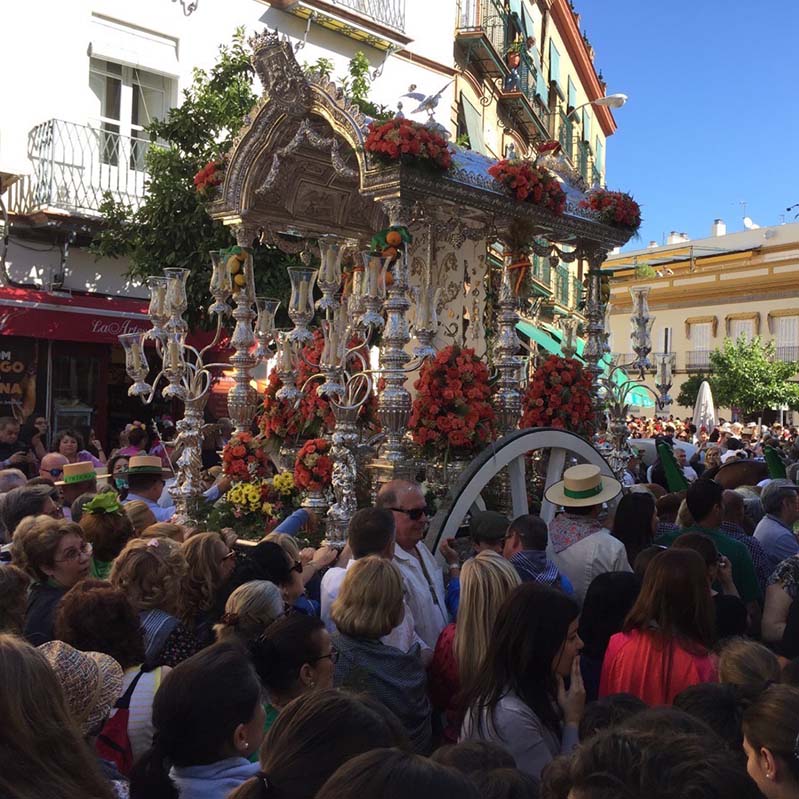 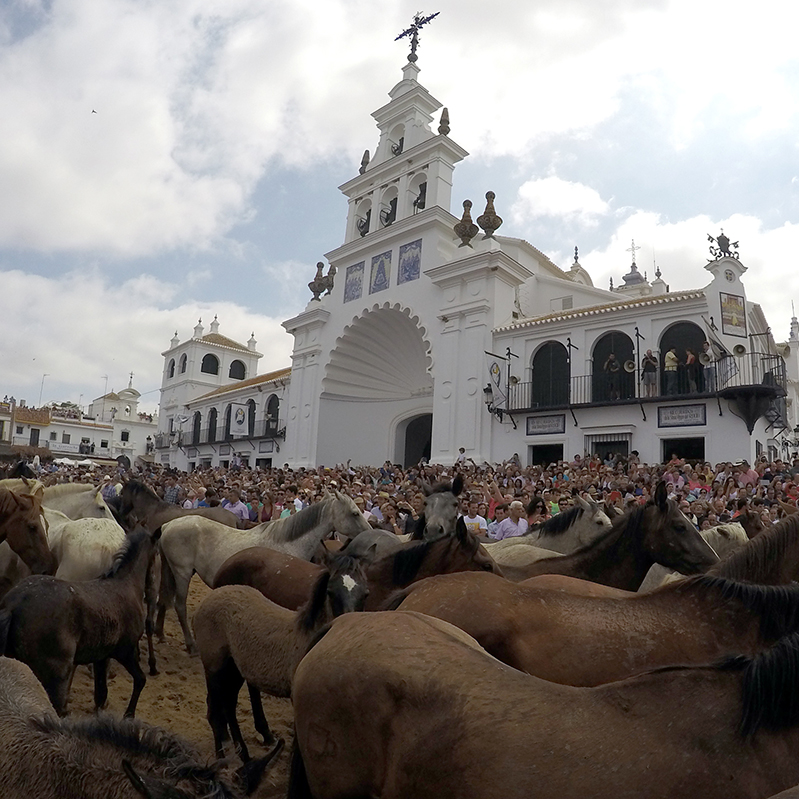 For centuries, this tradition has been celebrated every June 26. It is not known for sure when the Saca de las Yeguas has been made. The truth is that for centuries, on June 26, the farmers of Almonte collect mares and foals that graze all year round in several marismeños enclaves that are within the Doñana National Park.